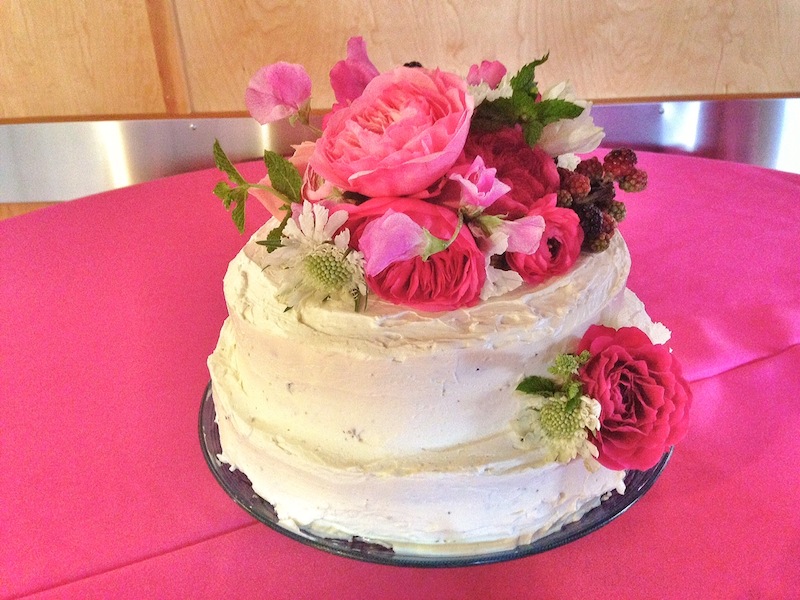 One of the most memorable parts of working for my father while growing up was getting to work at every single station in his restaurant’s kitchens. After chopping through hundreds (14-year-old me says millions) of boxes of various mushrooms, peeling bags upon bags of carrots, and making endless vats of sauces, I eventually made my way through the prep, appetizer, and entrée stations, and I finally finished my “education” in desserts. At the time, those fifteen-hour double shifts felt like slave labor, but now I realize just how lucky I was to learn the professional concepts and techniques that I carry with me today.

Fast-forward to one month ago. It was only natural that when two of my closest friends, Lucas Pino and Roxy Coss, asked me to fly across the country to Seattle and make their wedding cake for them, I would unhesitatingly say yes. I mean, I’ve made countless tiramisus and flourless chocolate tortes before—how hard could making a wedding cake really be?

Turns out, the answer is very, very hard. 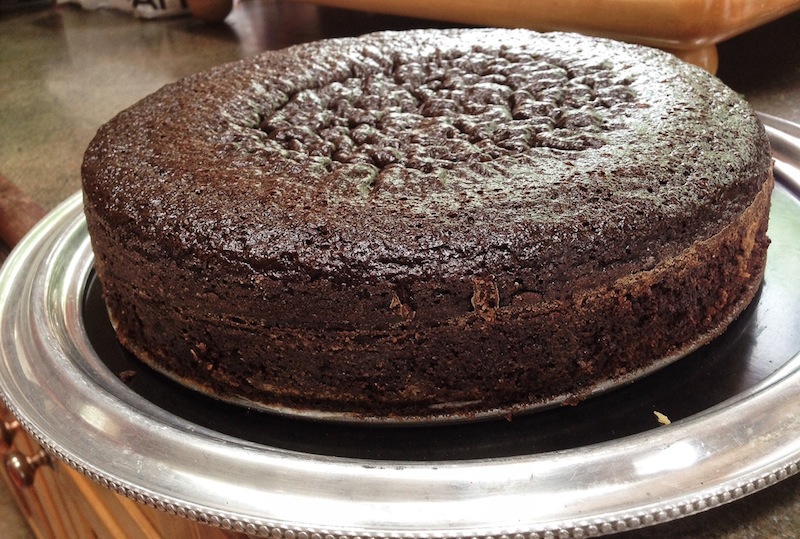 I had it all planned out: I’d do a test run here in New York City, fly out to Sacramento the week before the wedding for a West Coast house concert tour with pianist Jeremy Siskind and vocalist Nancy Harms, arrive at Roxy’s house the day before the wedding, bake the cake, and be a hero. Easy breezy…or so I thought.

I needed to decide on a recipe. Roxy and Lucas wanted something fairly straightforward, and a family friend would be decorating the cake with fresh flowers the day of the wedding. “Easy,” I thought. I’ll just whip up a nice tasting frosting and make it semi-presentable, er, rustic looking, and I’ll be home free. I decided on a dark chocolate cake with layers of chocolate ganache and raspberry filling, and a white caramel frosting. I didn’t have spring form pans at my apartment, so I had to improvise—a 9×13 pan would have to do. I made the ganache and raspberry fillings, baked the cake, cut the cake in two for layering, and was ready for the assembly.

First, I shoveled a generous layer of ganache onto my first layer, followed by an even more generous layer of raspberry filling. You can’t have too much cake filling—am I right or am I right? On went the top half of the cake. “It doesn’t look half bad!” I said to myself as I prepared the frosting. It was in this moment that my lack of preparation and research really caught up with me. The icing was much too dense for the cake; it began to rip huge chunks out of the top layer, peppering the icing with chocolate crumbs as it haltingly spread. And that part about never having too much filling? Fun fact: there IS such a thing. The ganache and raspberry filling oozed out the sides of the cake, giving the chocolate-flecked frosting a new reddish hue. It was hideous. After staring at the cake in shock for a solid minute, I decided to take a bite. It must at least taste good, right? Wrong. The frosting was tooth-achingly sweet, and with the ganache and raspberry filling, I could barely finish my first forkful. And I ALWAYS finish all my forkfuls of cake. Attempt 1: complete failure. 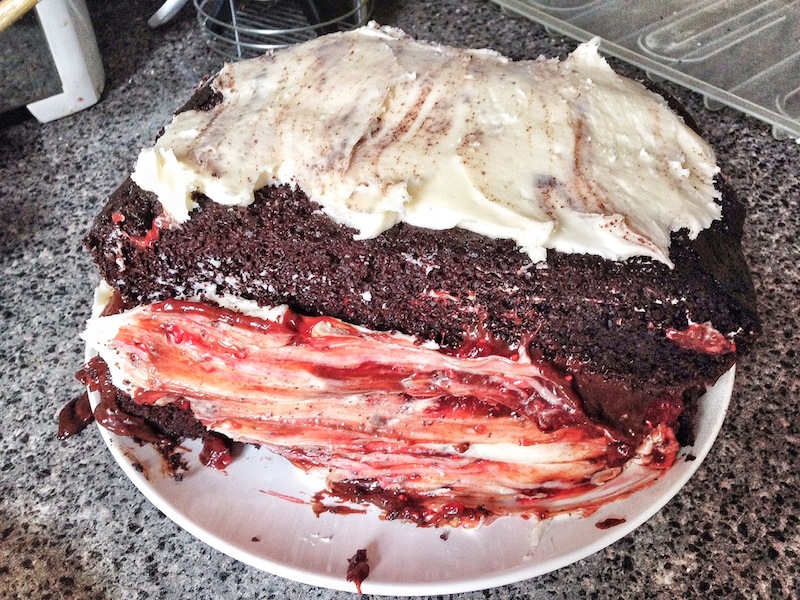 Back to the drawing board I went. After a few days of intense wedding cake baking research, I was prepared for a second attempt. This time, I bought spring form pans, wooden dowels to support the top tier of the cake, and a serrated knife to divide each cake into even layers.  I also tweaked the recipe; I was now baking a dark chocolate cake with layers of raspberry filling and dark salted caramel, with a Swiss meringue buttercream frosting.  I couldn’t find a cake recipe that incorporated all of these elements, so I adapted recipes from various bloggers that I enjoy (listed at the bottom) and combined them to make a cohesive final product. This time around was much more successful; I eased up on the fillings, and the frosting was much lighter and less sweet. I was ready for action. 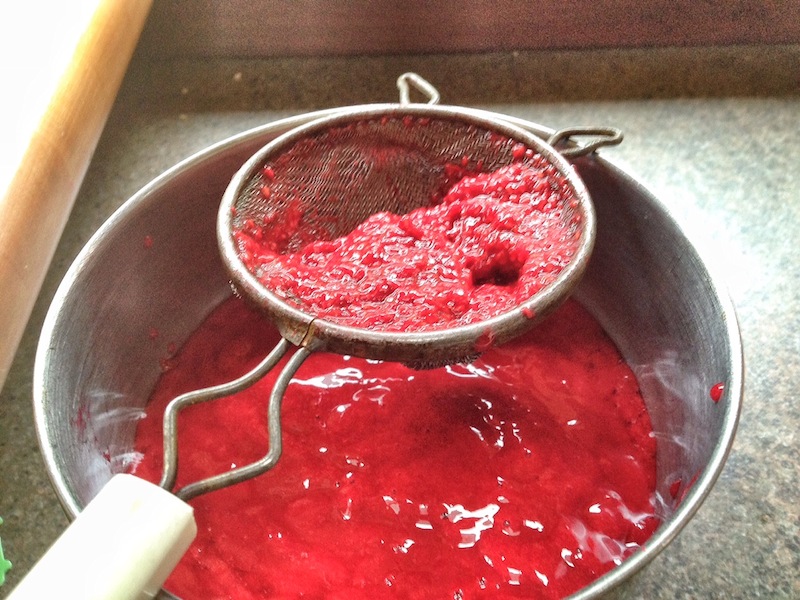 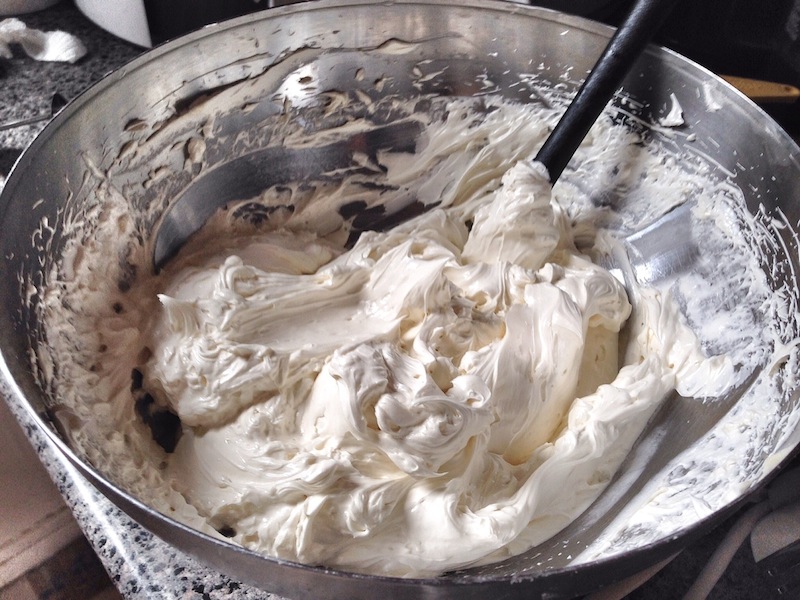 I arrived at Roxy’s house at 10am the day before the wedding with all of my supplies, and a newly fractured foot (I rolled my ankle while jogging on tour a few days before). I hobbled through the kitchen on a clumsy walking boot, but it wasn’t going to stop me. First up were the fillings. The raspberry and caramel fillings came out even better than in the test run; I was off to a great start. Once the cake batter was ready, I opened the oven door only to realize the oven wasn’t working! A wave of panic set in, but there was no time to freeze up—this cake had to be cooled and frosted in a matter of hours. Thanks to a friendly neighbor, we found a working oven. I managed to cool the cakes, divide and fill them, and frost/stack them just in time to leave for the rehearsal dinner. Being that I was a groomsman, there was no time to see the cake until the wedding reception the following day. My job was done. Now we just had to wait and see how the cake would hold up. 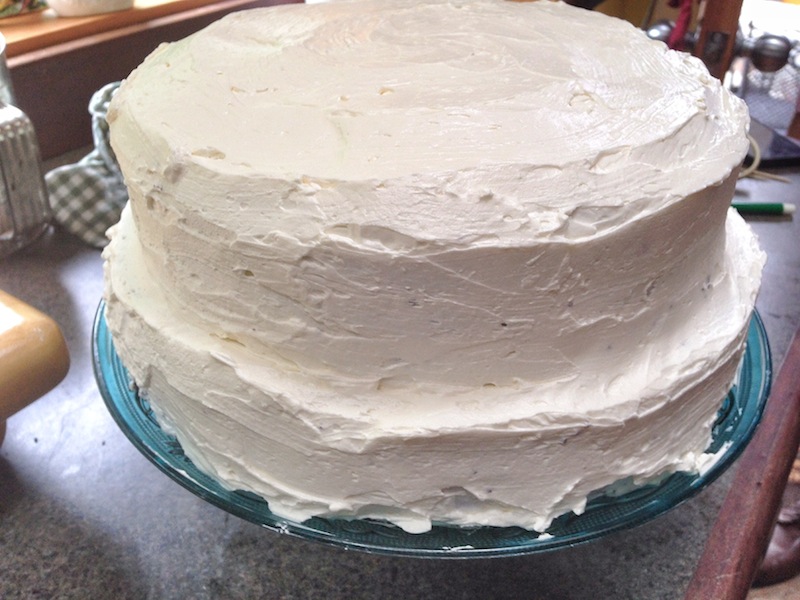 We arrived to the reception the next day, and there was the cake, all dolled up with a variety of flowers.  It looked like a real wedding cake, much to my relief. But the moment that made it all worth it was seeing the expressions on Lucas and Roxy’s faces after they took their first bites. Shortly thereafter, the wedding party followed suit and devoured eight hours of work in about twenty minutes flat. 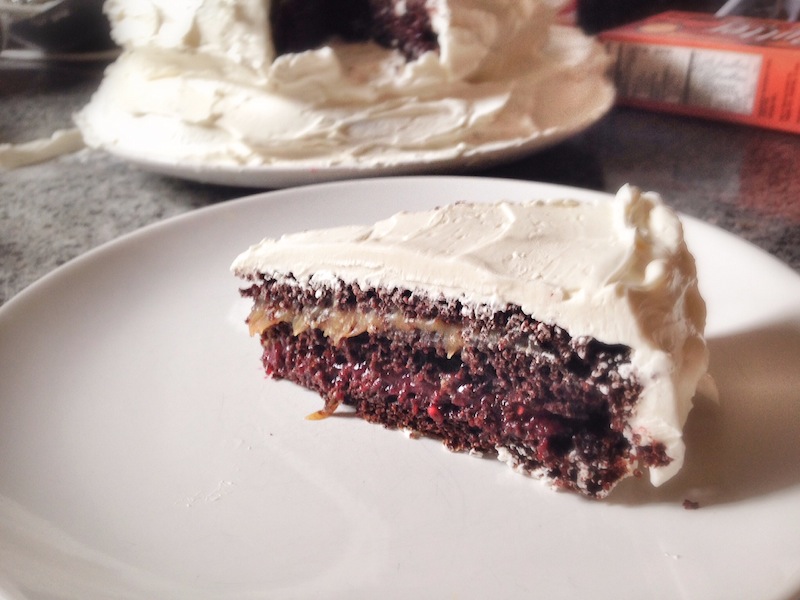 Would I make a wedding cake again? Who knows. It was definitely an experience that took me out of my comfort zone, and I love a good adventure. My respect for pastry chefs has grown tenfold after these past few weeks, along with my waistline. Cardio is hard to do with a fractured foot, so…I guess I’ll just eat some more cake in the meantime.

PS- During the oven drama, Roxy’s father managed to fix their oven while the cakes were baking across the street. This little development gave me the chance to bake a “joke wedding cake” too—boxed red velvet cake mix, tub cream cheese frosting dyed bright canary yellow, rainbow sprinkles, and bacon piled on top. Roxy saw right through my prank and didn’t buy it for a second when Lucas and I “revealed” her wedding cake to her. Even so—totally worth it. 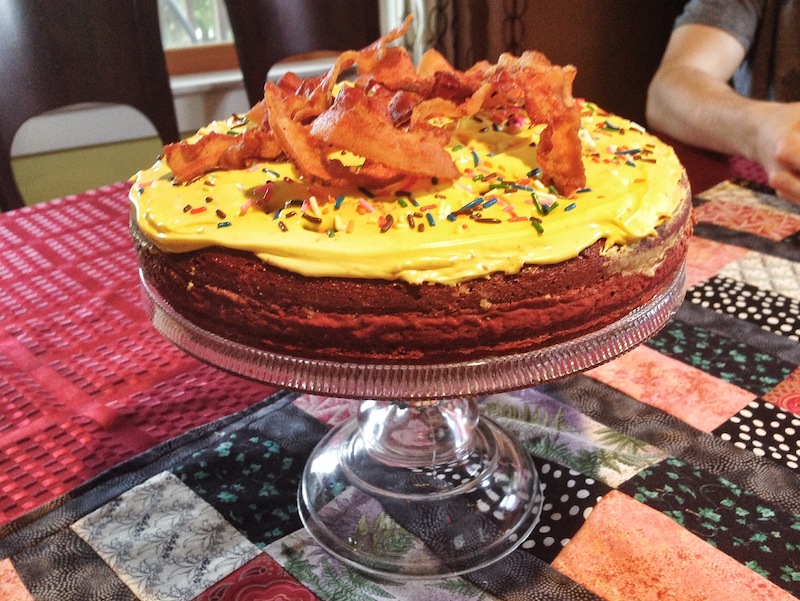 Perfect Chocolate Cake from I Am Baker
*For this recipe, I substituted one cup of hot water mixed with four heaping tablespoons of high quality cocoa powder in place of 1 cup of coffee.

*For a two-tiered wedding cake (one 10″ layer, one 8.5″ layer), I doubled the cake, raspberry, and caramel recipes.

This site uses Akismet to reduce spam. Learn how your comment data is processed.